Matriculated student of the Beijing Institute of Physical Education and captain of student pickets, shot three times in Tiananmen Square opposite the Tiananmen east-viewing platform. One of the bullets remained in the body for 19 years. In 2008, surgery was performed to remove the bullet in France.

One bullet hit the upper third of the thigh bone of the right leg causing comminuted fracture.
He was brought to Beijing Tongren Hospital, where he came to the attention of the authorities. After interrogation, he was allowed to stay in hospital for treatment.
After a 90-day hospital stay, he was discharged and then lived undercover for 12 years in China.
In 2001, he was exposed due to his work defending the rights of taxi drivers. He subsequently went into exile in France, joining the overseas democracy movement, and became a Christian preacher.
On April 15th, 2019, he lapsed into a coma due to hepatic ascites on a plane to Paris, France and was sent to hospital in Germany for treatment. He died on April 17th, at the age of 48. 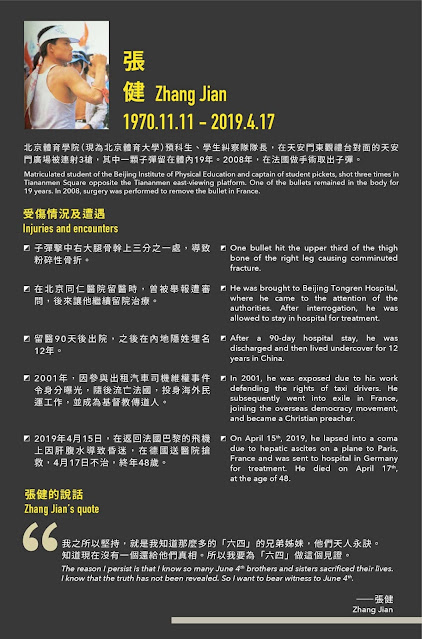 我之所以堅持，就是我知道那麼多的「六四」的兄弟姊妹，他們天人永訣。知道現在沒有一個還給他們真相。所以我要為「六四」做這個見證。
The reason I persist is that I know so many June 4th brothers and sisters sacrificed their lives. I know that the truth has not been revealed. So I want to bear witness to June 4th. 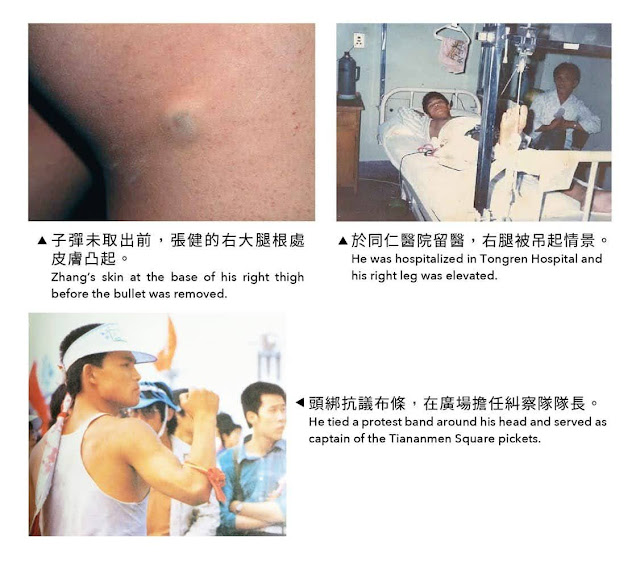 1. 模型顯示張健中彈位置（子彈為複製品）
The model shows the position of bullet in Zhang's body. (The bullet is a replica.)

▲ 子彈未取出前，張健的右大腿根處皮膚凸起。
Zhang’s skin at the base of his right thigh before the bullet was removed.

▲ 於同仁醫院留醫，右腿被吊起情景。
He was hospitalized in Tongren Hospital and his right leg was elevated.

▲ 頭綁抗議布條，在廣場擔任糾察隊隊長。
He tied a protest band around his head and served as captain of the Tiananmen Square pickets.