八九民運期間事跡及遭遇 Deeds and encounters during the 1989 Democracy Movement 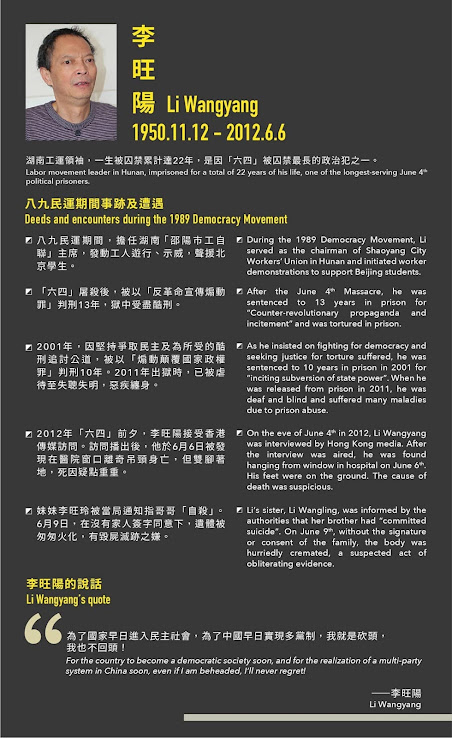 During the 1989 Democracy Movement, Li served as the chairman of Shaoyang City Workers’ Union in Hunan and initiated worker demonstrations to support Beijing students.

After the June 4th Massacre, he was sentenced to 13 years in prison for “Counter-revolutionary propaganda and incitement” and was tortured in prison.

As he insisted on fighting for democracy and seeking justice for torture suffered, he was sentenced to 10 years in prison in 2001 for “inciting subversion of state power”. When he was released from prison in 2011, he was deaf and blind and suffered many maladies due to prison abuse.

On the eve of June 4th in 2012, Li Wangyang was interviewed by Hong Kong media. After the interview was aired, he was found hanging from window in hospital on June 6th. His feet were on the ground. The cause of death was suspicious.

Li’s sister, Li Wangling, was informed by the authorities that her brother had “committed suicide”. On June 9th, without the signature or consent of the family, the body was hurriedly cremated, a suspected act of obliterating evidence.

為了國家早日進入民主社會，為了中國早日實現多黨制，我就是砍頭，我也不回頭！
For the country to become a democratic society soon, and for the realization of a multi-party system in China soon, even if I am beheaded, I’ll never regret!
——李旺陽 Li Wangyang 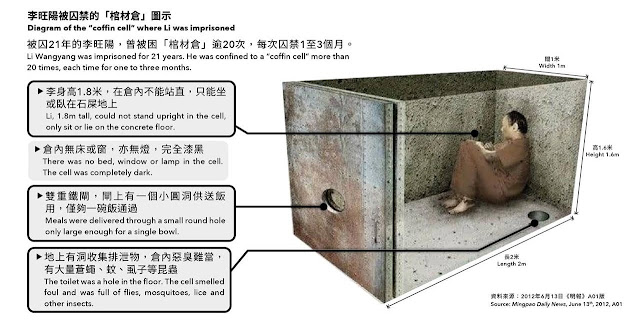 被囚21年的李旺陽，曾被困「棺材倉」逾20次，每次囚禁1至3個月。
Li Wangyang was imprisoned for 21 years. He was confined to a “coffin cell” more than
20 times, each time for one to three months.

▶李身高1.8米，在倉內不能站直，只能坐或臥在石屎地上
Li, 1.8m tall, could not stand upright in the cell, only sit or lie on the concrete floor.

▶倉內無床或窗，亦無燈，完全漆黑
There was no bed, window or lamp in the cell. The cell was completely dark.

▶雙重鐵閘，閘上有一個小圓洞供送飯用，僅夠一碗飯通過
Meals were delivered through a small round hole only large enough for a single bowl.

▶地上有洞收集排泄物，倉內惡臭難當，有大量蒼蠅、蚊、虱子等昆蟲
The toilet was a hole in the floor. The cell smelled foul and was full of flies, mosquitoes, lice and other insects.