傳媒寒冬 堅持說真話 Media Under Assault for Insisting on Truthful Reporting

During the 1989 democracy movement, members of the Chinese press joined marches, flying banners with slogans such as “We want to tell the truth. Don't force us to spread disinformation.” During army operations to clear protesters on June 4, Chinese people protected Hong Kong students and reporters with their bodies and lives, hoping that they could escape to reveal the truth to the rest of the world. Hong Kong people became a channel for conveying messages and exposing the truth.

Today, the Hong Kong media has reached a critical turning point; at stake is the survival of the free press. During the anti-extradition movement, the police insulted and attacked journalists covering the protests. Since the enactment of Hong Kong National Security Law in June 2020, the freedom of the press has eroded rapidly. The police raided the Next Digital building, headquarters of the pro-democracy Apple Daily newspaper. The public broadcaster Radio Television Hong Kong has been “harmonised” and its new director cancels programs at will, while Choy Yuk-ling, producer of the award-winning program “Hong Kong Connection” was convicted of “making false statements” in her investigative work for a program that shone a critical light on policing. But rather than “just getting used to it”, we should insist on living in truth.

▲1989年5月4日，北京新聞界參與遊行爭取新聞自由。
On 4 May 1989, the Beijing press participated in the procession for freedom of the press.

▲1989年5月28日，香港左派媒體也站出來支持北京民運。
On 28 May 1989, the leftist media in Hong Kong also took to the streets and supported the Beijing democratic movement.

▲2019年9月29日，印尼女記者在灣仔採訪時遭防暴警射傷右眼致永久失明。
On 29 September 2019, an Indonesian female reporter was injured in the right eye by riot police causing permanent blindness during news coverage in Wan Chai. 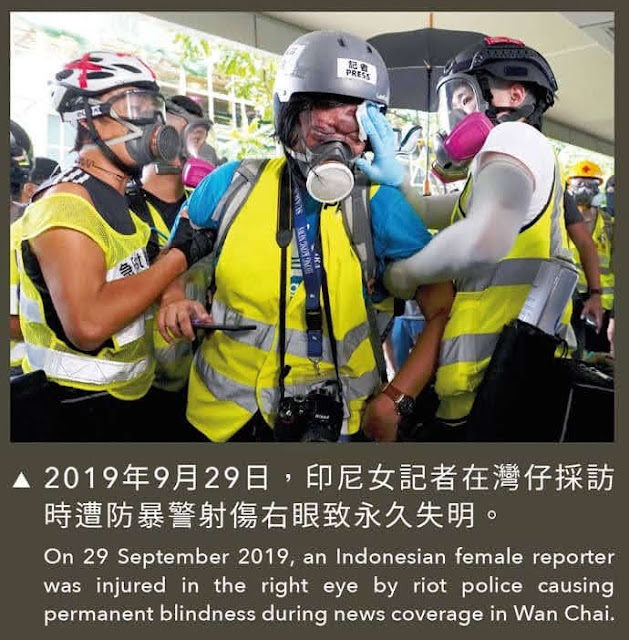