After the June 4 massacre in 1989, the CCP immediately carried out mass reprisals and arrests. A large number of pro-democracy activists and dissidents were arrested and imprisoned or exiled overseas. Operation Yellowbird was initiated in Hong Kong. Those involved risked their lives to rescue hundreds of people from China. Campaigns were initiated to demand the release of pro-democracy activists in prison and to send Christmas cards to prisoners.

After the anti-extradition movement of 2019 and the Hong Kong National Security Law which took effect in 2020, thousands of Hong Kong people were arrested, prosecuted and imprisoned, and an increasing number of movement leaders and ordinary activists were forced into exile overseas. From sheltering refugees to becoming refugees themselves—is this the “new normal” for Hong Kong people?

▲1989年6月24日，香港「反秋後算帳」集會及遊行，抗議「六四」後的白色恐怖。
On 24 June 1989, people took to the streets and assembled in Hong Kong “against reprisal” to protest the white terror after June 4.

▲八九民運學生領袖王丹。
Wang Dan, student leader of the democratic movement in 1989.

▲八九民運學生領袖吾爾開希。
Wu'erkaixi, student leader of the democratic movement in 1989.

▲「六四集會」案，袁嘉蔚、黃之鋒等香港年輕抗爭者於2021年5月6日被判刑。
In the case of “assembly on June 4”, Tiffany Yuen, Joshua Wong and other Hong Kong young activists were sentenced on 6 May 2021. 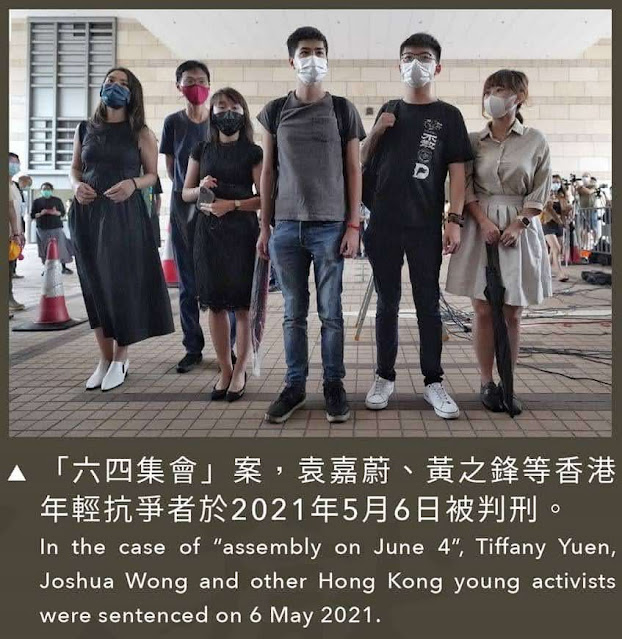